An army marches on its stomach, so the old saying goes – and this is why the Army Catering Corps played such an important role in the success of the British Army during World War 2. Making sure they never went hungry, the ACC was the key to keeping up the troops’ morale during the 1939-45 conflict.

The wartime subscription meant many members of the ACC were cooks in peacetime, so the professional chefs improved the training of the army caterers. The military catering corps was supported by the civilian organisation, the National Army and Air Force Institute – better known by its abbreviated name of the NAAFI. 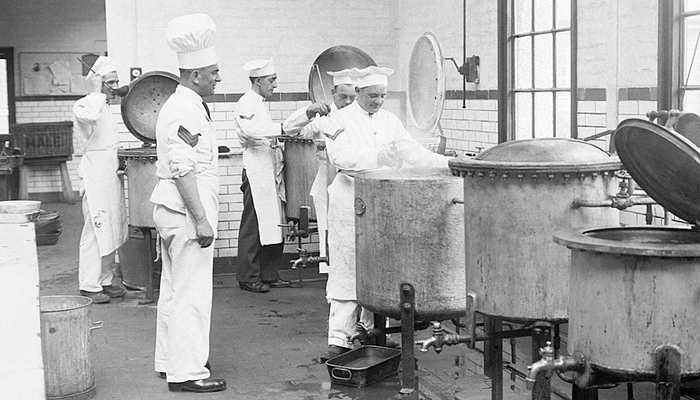 So successful was the ACC unit, that in October 1945, after the end of the war, it was decided the catering corps would be retained as part of the post-war army. Over the years, it has developed its structure and training programmes, becoming an independent corps in its own right in 1965.

Who fed the troops in years gone by?

The saying, “An army marches on its stomach,” was attributed to the great French military leader, Napoleon Bonaparte, yet little had been recorded in the history books about catering for the armed forces prior to WW2.

Historians believe this is because cooking is seen as a trade and in the past, only the heroics of the frontline troops were documented. It was said that good food for the army was an exception, rather than the rule, in war zones of years gone by.

The quality and quantity of the soldiers’ food in the 19th century was largely determined by what it would cost the taxpayer and what the long-suffering troops would be prepared to accept without falling ill or making serious complaints. As soldiers’ welfare became more important in modern times, as did the need to feed them nutritious meals.

How did the Army Catering Corps begin?

The origins of the ACC date from late 1936, when tensions were rising in Europe. The British government needed to increase the size of the armed forces. By 1938, the war against Nazi Germany was on the horizon, due to the rise in support for the Führer and dictator, Adolf Hitler.

With war clouds gathering, Britain’s Secretary of State for War, Leslie Hore-Belisha, realised a complete overhaul of the military catering services was urgently needed to ensure the increased number of British troops would be provided for. He appointed an honorary catering adviser for the army, the British businessman and Conservative MP Sir Isidore Salmon, who was tasked with looking into the reforms.

Salmon was well qualified to handle the catering service, as he had served an apprenticeship in the kitchens of the prestigious Hotel Bristol, in London, in his youth. He had also honed his skills at the British restaurant chain launched by Joseph Lyons, before taking over as Head of Catering at the Olympia Exhibition Centre and then at The Crystal Palace – the famous exhibition centre in London’s Hyde Park.

His parents’ family business, Salmon and Gluckstein tobacconists, joined forces with Lyons to expand into catering, so the MP had a lifetime’s experience in the industry. He had soon produced a report detailing many reforms for the army catering services.

He appointed Richard Byford, former catering manager of the Trust House Hotels’ chain, as the Army Catering Chief Inspector. He also created the military school of catering at St Omer Barracks in Aldershot. All of this was achieved before the end of 1938. Subsequently, the Army Catering Corps was officially launched at the start of 1941, initially as part of the Royal Army Service Corps, as a direct result of Salmon’s recommendations.

How did the ACC benefit the troops during WW2?

The new organisation meant a new type of soldier was born. Known as the “soldier-cook” on the army’s recruitment posters, he was described as “two professionals in one”. This was indeed the case, as recruits who joined the ACC had to complete their training as cooks at the Army Catering School in Aldershot, before working for the unit on active service.

During WW2, the new corps became highly successful in maintaining the troops’ morale. More civilian caterers were called up to manage the training of army cooks as the unit grew. During the war, more than 70,000 people served in the ACC.

Prior to the unit being formed, each individual battalion had been responsible for its own catering arrangements, but the ACC centralised operations to form a unit whose sole job was providing high quality and nutritious meals to keep the frontline troops well-fed.

Considering a staggering 2.9 million men had served in the British Army by the end of WW2, it’s apparent what a huge and important role the ACC played. This importance was recognised on 29th May 1943, when Army Order 819 decreed the ACC was an all-tradesman corps, acknowledging the professional skills of the trained cooks who served in the corps.

One of the most challenging aspects of the ACC during WW2 was to make sure the troops’ food remained fresh, even when they were serving in the summer months, or in hot climates overseas. It was important to ensure the meat and vegetables were kept fresh and free from bacteria, so the soldiers didn’t get food poisoning.

During conflicts in years gone by, this wasn’t always successfully achieved. The cooks in the ACC were fully-trained professionals and recognised the importance of cleaning pots and pans thoroughly and disposing of waste properly to avoid attracting flies and other insects.

The refrigeration industry in the UK pulled together during WW2 to help the war effort and the production of commercial refrigerators increased. Historians say never before, and never since, has one nation been so united with the single purpose of winning a war.

Service technicians were employed to handle the heavy refrigeration equipment, diagnose problems quickly and find solutions in the field. They became prime candidates for military service, while many factories across Britain were commissioned to build machinery, including refrigerators, to support the war effort.

What was the role of the NAAFI?

During World War 1, the Expeditionary Force Canteens were launched to provide food for soldiers serving overseas. They were run jointly by Army Service Corps and the Canteen and Mess Co-operative Society.

The Army Canteen Committee was created towards the end of WW1 to run army canteens at home. This later became the Navy and Army Canteen Board, which took over the Expeditionary Force Canteens in 1919.

The civilian organisation, the NAAFI, was launched by the British Government in January 1921 to run canteens and recreational services for the armed forces. Making an important contribution during WW2 by running military canteens to serve the food provided by the Army Catering Corps, the NAAFI had 96,000 personnel and ran 7,000 canteens by the end of WW2. In 1939, the service had only 4,000 personnel and around 600 canteens, so its growth was rapid between 1939 and 1945.

As well as providing services in Britain and in Europe, the NAAFI controlled the forces’ entertainment organisation, the Entertainments National Service Association (ENSA), which also played a key role in maintaining troop morale.

What happened to the ACC after the war?

The Army Council announced it was retaining the ACC on 5th October 1945, as it had come to play an integral part in the success of the army. The corps expanded in the post-war years and in February 1947, it welcomed its first intake of junior trainees, who were the forerunners of the popular catering apprenticeship scheme.

The legacy of the Army Catering Corps has continued into the 21st century. As a result of the Options for Change review in April 1993, the ACC amalgamated with the Royal Corps of Transport, the Royal Army Ordnance Corps, the Postal and Courier Service of the Royal Engineers and the Royal Pioneer Corps to form the Royal Logistic Corps.

On 11th November, at 11am,  KF Bartlett we will be observing the 2-minute silence as a mark of our respect for all those who served in times of conflict to protect the freedom of our great nation. We will remember them.