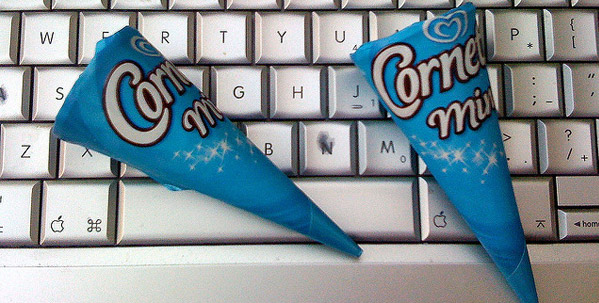 If you were around in the 1980s, you’ll remember the famous ice-cream advert featuring a singing gondolier in romantic Venice. Just One Cornetto was voted the catchiest advertising jingle ever – it’s probably still embedded in your brain more than three decades later!

First aired in 1982, the famous advert for Wall’s Cornetto featured a young woman eating an ice-cream, while relaxing in a gondola and being serenaded by a gondolier in another boat coming from the opposite direction.

Thinking she is being wooed, she sits back, eyes closed, enjoying the operatic interlude, as the singing boatman gets closer. To her surprise, he is only after her Cornetto – he smartly whips it out of her hand as their boats pass and makes off with it down the Venetian canal!

The jingle, Just One Cornetto, was set to the tune of the famous 1898 Italian opera song, ’O Sole Mio, which is a globally recognised Neapolitan song. The music was composed by Eduardo di Capua and Alfredo Mazzucchi and the original lyrics written by Giovanni Capurro, who is a well-known 19th century poet and playwright.

The original lyrics spoke of the beauty of a sunny day, the air serene and fresh after a storm, while the real sunshine radiated from the beauty of the writer’s sweetheart. The Cornetto advert had rather different lyrics, beginning with the famous line, “Just one Cornetto, give it to me!”

The jingle was sung by operatic singer Renato Pagliari, who died at the age of 69 in August 2009. A former Italian waiter, he shot to fame in 1982, when he had a number one UK chart hit, Save Your Love, with singing partner Renée – alias Hilary Lester – which stayed in the top spot for four weeks.

Rome-born Renato didn’t appear in the Cornetto advert and the song was mimed by an actor. Although born in Italy, Renato had emigrated to the UK and spent much of his life in the West Midlands, where he was an avid Aston Villa football fan.

Villa manager Ron Atkinson so admired Renato that he enlisted him to sing Nessun Dorma at half-time during a match in the 1990s to inspire the team!

The Cornetto advert was a marketing dream, as it had everything – a glamorous location, romance and a memorable jingle that stuck in everyone’s head.

When the advert was first released in 1982, the Cornetto was already one of Wall’s most popular ice-creams. It was first manufactured by Italian ice-cream company Spica in 1959. When a delegation from Unilever – the owner of the Wall’s brand – visited Spica on a trade trip in 1962, they were so impressed that they acquired the company.

The Cornetto first appeared in the UK in 1964, but it wasn’t until the famous heatwave in 1976 that it finally took off. The gondolier advert ensured it rocketed to mass popularity in the 1980s and the strawberry flavour remains the second best-selling ice-cream in Britain to this day.

Over the years, Wall’s has added many different flavours to the Cornetto catalogue including the original flavours such as vanilla and strawberry, along with today’s mouth-watering selection including mint chocolate, peanut butter, nut, chocolate chip, cookie dough, lemon whippy, raspberry, double chocolate and many more. The Cornetto Love Potions range was released in 2004, with exotic flavours such as tiramisu and cinnamon, and cappuccino and Irish Cream.

It was estimated that in 2004, when Cornetto sales boomed to 80 million for the year, the number sold would stretch from the UK to Australia if placed end to end!

In 2013, Unilever expanded into the sweets market and launched Cornetto chocolate confectionery in the UK, signing a licensing deal with Kinnerton Confectionery.

A survey of 1,000 people found that more than 70% recognised the original 1982 Cornetto advert and remembered its first broadcast. The original advertising campaign ran throughout the 1980s and ’90s. The 1982 advert was then remade in 2006, this time featuring London workers and residents singing Just One Cornetto.

Today, for a large number of British consumers, Cornetto’s alternative lyrics to ’O Sole Mio are more famous than the original.

If you’re looking for somewhere to store your Cornetto, or any other frozen products for that matter, check out Bartlett’s large range of freezers that are suitable for commercial and domestic applications. Please contact us to find out more.