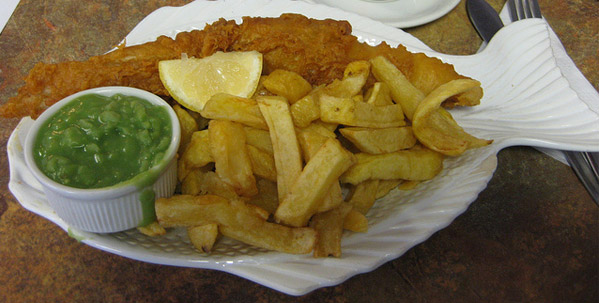 Fish and chip Friday is a staple of British culture, when people traditionally enjoy a “chippy tea” and bring home the nation’s favourite takeaway. Battered white fish, such as haddock or cod, a bag of chips and a polystyrene carton of mushy peas, curry or gravy are served up in many a household across the UK.

Fish and chip shops first sprang up in Britain in the 1860s, but the tradition of eating fish on a Friday dates back way before that. According to religion, it is a requirement to abstain from meat every Friday and throughout Lent.

Although many non-religious people celebrate Easter by giving gifts of chocolate Easter eggs, it is at the heart of the Christian calendar. It’s a celebration to mark Jesus Christ’s resurrection, commemorating his death on the cross on Good Friday and his resurrection on Easter Sunday.

To do penance for his death, we eat fish instead of meat on Good Friday because of the Roman Catholic tradition. Jesus sacrificed his flesh (his life) on Good Friday. He died for our sins, so the church asks us to acknowledge his sacrifice.

On the anniversary of Christ’s death, although followers won’t eat meat, fish is an acceptable alternative because fish are not warm-blooded animals. Easter falls during the Christian calendar at a time of year known as Lent, when devotees abstain from eating certain foods to demonstrate self-restraint for 40 days.

Lent begins on Ash Wednesday, which is in February each year. The 40-day fast continues until the Thursday before Easter Sunday. After this date, people can indulge again – hence the feast of chocolate eggs in modern times.

Now, fish and chips is the meal of choice for thousands of families on a Friday evening, but many don’t realise why the chippy tea is so embroiled in British tradition.

Before the first fish and chip shop opened in the mid-19th century, people would buy and cook fresh fish on a Friday. Those who lived in sea ports were lucky, as they could buy it freshly caught from the docks but for others, the fishmonger was the answer.

Located on Endell Street, London, the Rock and Sole Plaice is believed to be Britain’s oldest fish and chip shop. Founded in 1871 by the Fenner family, the chippy remained a family business for almost a century. It was taken over by Ray Fenner, grandson of the founder, in the 1920s and he ran it until 1968.

His daughters, Anna and Rachael, wanted their late father’s legacy to live on and they passed on their recipes and cooking tips to the current owners, so that customers could still enjoy the traditional fish and chips that have been served the same way for 147 years.

The two-storey restaurant serves locally sourced fish that is cooked using the original batter recipe, which has been enjoyed by generations of customers.

So, just how should fish and chips taste? The traditional meal comprises fish lightly coated in batter, so it’s crisp on the outside and never soggy. This is served with fresh potatoes sliced in thick chunks and deep fried – thinner chips in many fast food places are American fries and should not to be confused with British chunky chips.

The tradition of frying fish in batter is believed to have been introduced in England in the 17th century by Western Sephardic Jewish immigrants. The fish was dipped in batter made of flour mixed with water.

Over the years, other variations were introduced, such as making the batter with beer or soda water rather than plain water, or with cornflour instead of regular flour. However, the basic recipe has remained the same.

The first fish and chip shop is said to have been opened in London in 1860. Joseph Malin came to England from Eastern Europe and opened a chippy in the East End.

Growth of the chippy

By 1910, more than 25,000 chippies had opened across Britain. Fish and chips had become a staple diet, particularly for working class families in the north of England.

Professor John Walton studied the history of the humble chippy for his book, Fish and Chips and the British Working Class. He claimed the British government ensured supplies of fish and potatoes were safeguarded during World War I. He said the Cabinet realised the importance of keeping people on the home front well fed and in good heart.

This practice continued during World War II, when fish and chips were one of the few foods that weren’t rationed. According to historians, fish and chips also played a part in the D-Day Landings because they were so embedded in British culture. It is said the British soldiers identified each other amid the confusion by shouting “fish” as a code word. They would await the correct response of “chips”.

Today, Brits eat around 382 million portions of fish and chips annually, which equates to six servings for every man, woman and child in the country. We spend an amazing £1.2 billion in the chippy every year in the UK!

The free-standing heavy duty fryer and the double pan fish fryer are among the best sellers in the Bartlett range.